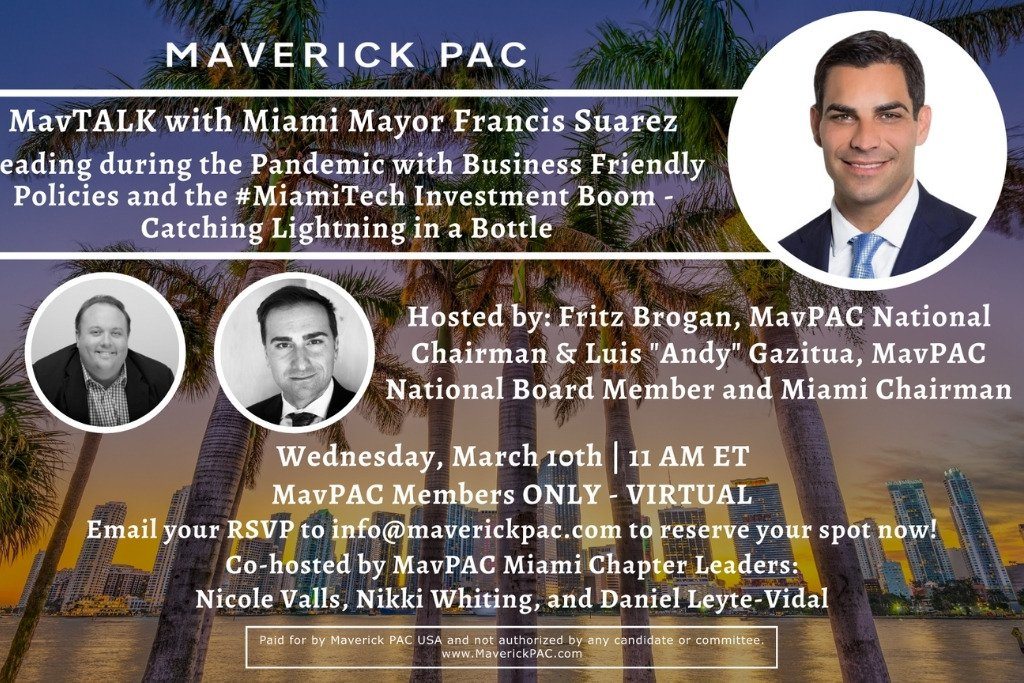 On March 10th, the MavPAC will be conducting a zoom-in forum.  Luis Gazitua, National Board Member of MavPAC, and Fritz Brogan, National Chair of MavPAC, will co-host the Zoom event featuring City of Miami Mayor Francis Suarez. The goal is to educate MavPAC members on best practices, introduce new ideas, and provide an update on the efforts Mayor Suarez has made to exponentially grow the Miami economy.

The 30-minute MavPAC webinar is available strictly to members. Gazitua and Brogan will discuss a variety of topics with Mayor Suarez. These include:

Of course, Twitter’s Mayor and Miami’s Promoter-in-Chief will use the MavPAC webinar as an opportunity to discuss the #MiamiTech movement he’s thrown his weight behind over the last months. Starting off the hashtag #MiamiTech, announcing a rather open-door policy with his “How Can I Help” initiative, not to mention billboards and cryptocurrency conversations,  Suarez has made it clear that he envisions Miami as the next Silicon Valley. Add his actions to the already favorable tax climate, the warm physical climate, and a global port within its borders, both the City of Miami and all of South Florida are seeing an increase in Tech and VC companies taking advantage and relocating.

Luis Gazitua is a National Board Member of Maverick PAC (MavPAC).

MavPAC is the premier national network for conservative next-generation business professionals. The largest chapters include Florida, Texas, New York City, and Washington D.C. MavPAC members rally around the common goal of supporting and electing like-minded candidates for federal office, especially those who are millennials.

Luis will be joined by Fritz Brogan. Fritz is the National Chairman of MavPAC. Fritz is the co-founder and managing partner of Mission Group, a hospitality company that develops, operates, and owns multiple restaurant and bar concepts in the Washington D.C. area. Fritz serves on the Advisory Board of the Global Hospitality Leadership program at Georgetown University’s School of Continuing Studies and is a member of the YPO Washington D.C- Baltimore chapter. Fritz also frequently hosts these types of discussions for the American Enterprise Institute (AEI).